A Clean You Can Trust

The Research
In a series of tests that compared short-term and long-term soil removal and dust emission control, of five leading upright vacuums and the BEAM Serenity Central Vacuum System, technicians at Professional Testing Laboratory, Dalton, Ga., found two top-performing upright vacuums’ soil removal fell 10 percent to nearly 14 percent from the beginning to the end of the test, while the BEAM system maintained consistent soil removal.

The Findings
“The BEAM system delivered impressive, sustained cleaning capability from the beginning to the end of the study,” says Gary Asbury, president of Professional Testing Laboratory.

”The BEAM Serenity also maintained consistent emission control, releasing less than 6.6 micrograms per cubic meter of respirable particulates throughout the study, fewer than any of the uprights tested. Three uprights that maintained their soil removal capabilities experienced major decreases in filtration, triggering increases in particle emissions ranging from a near doubling to more than 4,300 micrograms per cubic meter.”

With BEAM, Vacuuming Is Light Housekeeping

A lightweight hose and ergonomic tools let you move easily from task to task, level to level, floor to ceiling, and up stairs, without getting a sweaty workout from dragging around a heavy portable vacuum.

BEAM Cleaning Sets and hoses are extremely lightweight and designed for whole-house cleaning from floor to ceiling. Unlike short, flimsy hoses found on portable vacuums, BEAM crushproof hoses are created to withstand everyday kinks and twists.

The Quiet Way To Clean

Vacuum Whenever You Want Without Disturbing Anyone

How quiet is a BEAM Central Vacuum System?

A BEAM central vacuum system is quieter than most household noises that you are used to hearing every day. What does this mean for you? It means that you can easily vacuum your home while other activities are taking place in the room without disturbing anyone. You won’t miss that important call when the phone rings. You can even talk on the phone while you are vacuuming! 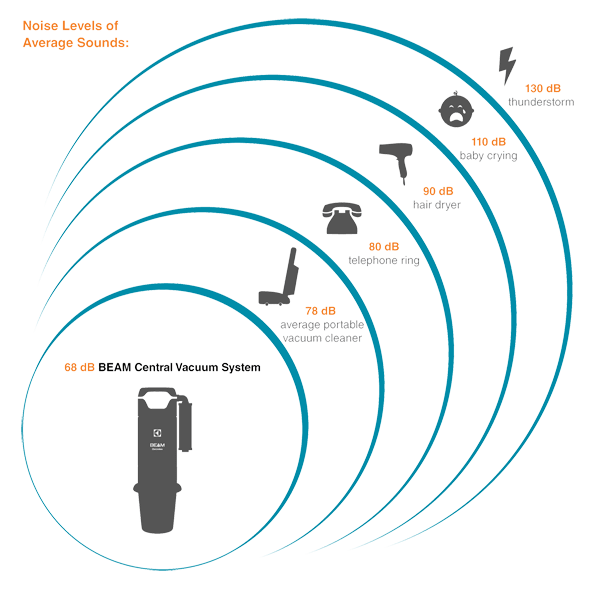 Particulates emitted during vacuuming after repeated use.

Each of the products studied was tested in brand-new condition and after repeated use. Technicians at Professional Testing Laboratory used each product to vacuum carpet containing approximately one liter of dirt and debris from previous vacuumings plus 50 grams of ISO Fine test dust that included particles as small as mold spores, dust mites, pollen and other contaminants that are associated with health problems.

The study included the use of X-Ray Fluorescence (XRF) technology enhanced by NASA to provide accurate analysis of soil-like elements removed from the test carpet. According to KeyMaster Technologies, a Kennewick, Wash. firm that developed the hand-held XRF scanner in collaboration with NASA, the tests marked the first use of XRF technology to analyze the cleaning performance of floor-care products.

The soil-removal tests were repeated until each portable vacuum’s dirt container was approximately half filled and emptied 10 times, as recommended by the manufacturers. Each product also operated in a state-of-the-art emissions chamber when it was brand new and after 10 loadings to measure respirable particulates emitted by each product during vacuuming. 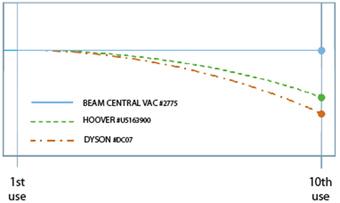 Lars Hybel, Vice President International at Electrolux Central Vacuum Systems, says the Professional Testing Laboratory test results help explain why allergic rhinitis patients who participated in a recent University of California, Davis, clinical study experienced a significant reduction in each of their allergy symptoms when they used a BEAM Central Vacuum System to clean their homes. The UC-Davis study participants recorded a 44 percent to 61 percent improvement in sleep, nasal, non-nasal, eye, and emotional symptoms, were more active and experienced fewer practical problems when they cleaned with BEAM Central Vacuum Systems instead of portable vacuums

“The consistent control of emissions from a central vacuum system means there are fewer airborne particles in the living area to trigger allergic reactions,” says Hybel. “Homeowners who use a BEAM Central Vacuum System are going to be able to have a clean home that has fewer allergens and is a healthier place to live.”

Don't Get Left In The Dust